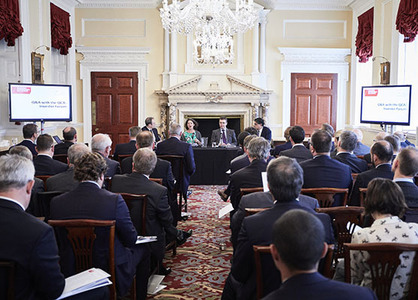 James Ashton, a business journalist at The Telegraph and the London Evening Standard, chaired the second panel session at our Investor Forum on how small and mid-size quoted companies can develop an effective and valued dialogue with the media.

He was joined by Kate Burgess, Corporate Correspondent at the Financial Times, Lee Wild, Editor of Interactive Investor and Harry Chathli, Director at Luther Pendragon.

James opened proceedings by stating that while business had received a higher proportion of reporting coverage in the ten years since the financial crisis, the actual depth of reporting had steadily declined. Nonetheless, he noted the rise in public interest in and awareness of how UK businesses operate and behave. This had been embodied by the words ‘austerity’, ‘FTSE 100’ and ‘LIBOR’ becoming prominent in the public lexicon. Yet despite this, smaller companies have continued to struggle to get coverage in favour of their larger counterparts.

The panel were in full agreement that companies who can tell their story in an interesting way had the best chance of attracting journalists’ interest. Doing so in an accessible way – free of industry jargon – improves the chances of the story being covered in the media. Kate stressed that this played a larger role in a journalist’s decision than the size of the company in question.

Kate referred to the wisdom of the ten commandments of dealing with reporters written by Sir Christopher Meyer – a former British ambassador to the United States. She particularly underlined the importance of not telling lies, as this would irrevocably lose a company its credibility with journalists. She also emphasised the importance of companies being accessible to journalists, by responding to missed telephone calls and emails as soon as possible.

Regarding the sources journalists use to research their articles, Lee explained that he placed great value on RNS announcements, brokers’ research notes and any fluctuation in a company’s share price. He noted that information contained in these sources would be appraised in concert with whether a story would resonate with the Interactive Investor readership.

The panel agreed that the availability forecasts contained within investment research pieces enhanced the probability of a company gaining coverage in the media as it plays a vital role in adding context to the company’s business strategy. Similarly, there was broad consensus that poorly designed company websites that do not clearly explain a company’s mission disincentivise journalists from reporting on that company.

Lee added that, as most editorial decisions are made by 8.30am, it is important for companies to execute good public relation strategies in order to entice journalists.

Harry stated that, from a press relations point of view, it was important to manage expectations. He noted that with over 2,000 companies on the Main List of the London Stock Exchange, it would always be difficult to obtain coverage in the print media.

With the advent of the 24-hour media news cycle, as well as the growing significance of social media platforms, Harry suggested that to counter this more companies consider self-publishing more news content on their activities, as long as this adhered to the points made earlier regarding accessibility and interest.

New Hardman & Co analysis on how transparency in forecasts has disappeared