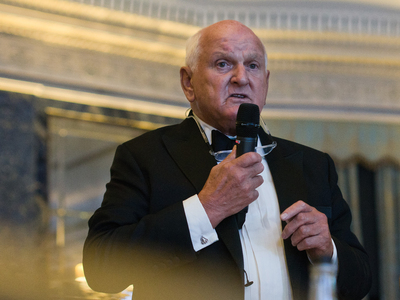 Over 350 members of the small and mid-size quoted company community, including company directors, investors, market operators, policymakers and regulators, attended the Quoted Companies Alliance 22nd Annual Dinner on 7 September 2016 at The Dorchester hotel. The event was sponsored by the London Stock Exchange Plc, with The Deal BoardEx as supporting sponsor and Winterflood Securities sponsoring the after-dinner drinks.

Xavier Rolet, Chief Executive Officer of the London Stock Exchange Group PLC, spoke at the event, highlighting that the quality of the UK’s public companies, and the unique ecosystem of the City of London gave enormous grounds for optimism, despite the current uncertainty that the outcome of the EU Referendum had created. He added that the success of small and mid-size quoted companies is the bedrock of growth in the British economy and has been built, in no small part on the foundation of London’s status as a global financial centre for international capital raising, trading, clearing and settlement.

Announcing that he would be stepping down as Chairman at the next Quoted Companies Alliance AGM, Michael said that he had enjoyed chairing the organisation for the last three years and was delighted to be handing over to Gervais Williams, Chief Executive of Miton Group plc, as non-executive Chairman in October.

He also added, on behalf of the Quoted Companies Alliance, his thanks to Brian Winterflood, one of the QCA's founders and our President for nearly seven years. Michael praised Brian, who is retiring fully from the City, for his 25 years' tireless and vocal championing of the Unlisted Securities Market, its successor AIM, and of the small and mid-size quoted companies that have benefitted from these markets.

If you have any comments about this year's dinner or are interested in booking a table for next year's dinner, please contact Samantha Green, Head of Marketing & Events.