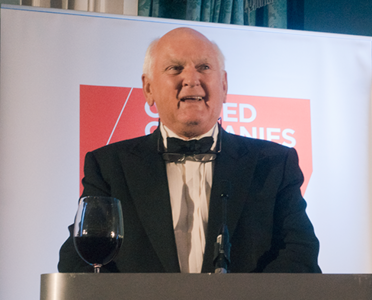 Brian Winterflood*, who in October stepped down as president of the Quoted Companies Alliance after seven years, reflects on his 60-year career in the City.

The QCA is a unique operation as it looks after every aspect of small to mid-cap companies, a sector vital to the UK. Without (CEO) Tim Ward and his team we might have to sign up to everything coming out of Brussels and some from London without being tested, and that would be horrendous.

Members get so much from the QCA. I think of Tesco’s ‘buy one, get one free’ but for one membership you get so much more – effective lobbying, valuable information and great networking events plus the access to 180 professionals on our expert groups working pro bono. .

In the 1960s I worked for a small jobber, one of a number of very competitive firms. Others made a market in smaller companies if it was in a sector where they also served big companies. But we were the only firm to cover most smallcap stocks. To impress their retail clients, stockbrokers came to us for a quick price and an opinion on those smaller companies they were disinclined to research fully.

Apart from the jobbers, there were several DTI-licensed ‘bucket shops’ that targeted companies looking to raise capital and acquire investors, then quickly move on. Ironically it was a socialist government who got rid of them.

We approached the London Stock Exchange about regulatory protection for small companies looking to raise capital and investors buying their shares. The resulting Unlisted Securities Market was different because companies coming to the market could give up as little equity as would enable a market in their shares. For about 10 years there were a lot of rags to riches stories, a lot of fortunes made and lost.

...changes to the listing rules spelled the end for the USM so as a group of entrepreneurs we formed the forerunner to the QCA,....

Proposed EEC changes to the listing rules spelled the end for the USM so as a group of entrepreneurs we formed the forerunner to the QCA, produced a document entitled “The Enterprise Market” and sent it to the Stock Exchange proposing a new version of the USM. We didn’t detect a lot of support but they finally came on board and, to their credit, did suggest a much better name than the one we proposed, i.e. “AIM”, the Alternative Investment Market.

The market has proved extremely profitable for companies and investors, not least because of the interest created by the QCA and it being under the regulatory umbrella of the Stock Exchange. AIM has brought vast amounts of employment because SMEs are where jobs and wealth are created.

Companies float and investors return to the market because it offers liquidity and protection. London has strong retail service providers. On the Continent companies are mostly courted by the banks who in regards to equity are not risk-takers.

To me the future looks rosy, especially as I hear the Prime Minister address the importance of small businesses and opportunities for everyone. But I have some concerns, unrelated to Brexit, about London retaining its financial pre-eminence.

I am watching the planned acquisition by Deutsche Börse of the London Stock Exchange carefully. While I note both sides’ assurances, AIM is such a small part of the whole I hope it does not get neglected as it is vitally important to the country. But there is still some way to go in the regulatory approval process. Don’t forget that the European Commission vetoed the Deutsche Börse merger with NYSE Euronext partly because NYSE's Liffe and DB’s Eurex were competitors.

Meanwhile, it’s vital that companies and investors retain access to equity. Debt may be inexpensive now but that will change and when interest rates rise, debt will need to be exchanged for equity. That should be done in London, which is pre-eminent in fundraising.

....the FTSE index has reached a new high since the UK referendum demand for equity won’t go away.

IPO activity has been slow but it looks to be picking up and the FTSE index has reached a new high since the UK referendum demand for equity won’t go away. The big thing for this Government is job creation – we’ve got the lowest unemployment in Europe so we won’t allow our equity markets to decline. I went to Paris and Frankfurt many years ago and they had little appetite for providing liquidity for retail trading through platforms like our RSPs (Retail Service Providers). Banks and investors in Europe prefer debt.

London’s role in settlement and clearing are further reasons for confidence. We do a fantastic amount of business because we have the best infrastructure in the world to support this activity. These functions are central to the financial system and if we lose them it won’t be the Europeans who pick them up but the Americans – a big consideration as London handles trillions in currency and commodities trading. It’s mindboggling, but a big opportunity for others – we must protect it whatever happens.

I see some challenges. Stockbrokers are under real pressure and would rather manage money up front for a fee. Crowdfunding, like payday loans, will come under increased scrutiny as gullible people are ripped off.

Finally, the Government is committed to improved education standards and for me this should include both a better understanding of finance and our 300 years of Stock Exchange history. I’m looking for help in establishing a stock exchange museum and financial education centre and would love to hear from those who’ve done well from the City and would like to give something back.

*Brian Winterflood MBE, Founder and Life President of Winterflood Securities, retires from his career in the City on his 80th birthday in January 2017.