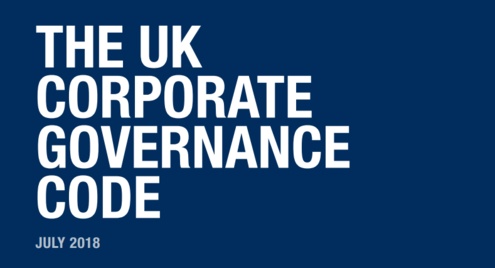 The UK Code was originally published in 1992, with the previous edition from 2016. In February 2017 the FRC announced plans for a review of the UK Code and conducted a consultation running from December 2017 to February 2018.

Some of the main changes in the new UK Code include:

During the consultation for the new UK Code, the QCA urged the FRC to allow smaller companies outside of the FTSE 350 to be able to comply with less strict provisions in a number of areas.

This is in recognition of differences in size between the biggest and smallest companies that have to adopt the UK Code and a need for a proportional approach that minimises the burden on smaller companies.

This has been reflected in a number of areas, including:

However, there are a number of areas where the QCA urged further exemptions for smaller companies that have not been included in the new UK Code, including:

Whilst all companies listed on the Main Market of the London Stock Exchange are required under the Listing Rules to follow the FRC's UK Corporate Governance Code, AIM companies can choose which corporate governance code they can use.

This requirement to state which corporate governance code AIM companies follow is new in 2018 and research indicates that most AIM companies are choosing to apply the QCA Corporate Governance Code, rather than the UK Code, as it is tailored for small and mid-size quoted companies in the UK.

The QCA Code is drafted by experts from the small cap community as part of the QCA’s Corporate Governance Expert Group. Some recent commentary of the QCA Code includes:

Many AIM quoted companies are taking the opportunity to change what code they are applying. In particular, many companies which previously adopted a qualified compliance statement in relation to the UK Corporate Governance Code are now choosing to adopt the QCA Code instead. They are attracted by the relative simplicity and perceived flexibility of the QCA Code compared to the UK Corporate Governance Code.
- Osborne Clark, June 2018

This new QCA code has been presented clearly and succinctly. At only 22 pages it covers what we would regard as the essentials with enough explanation to give the reader a good understanding of how to apply it to their governance structures.
- Lewis Silkin, June 2018

The QCA Code represents a proportionate and pragmatic approach to corporate governance for small and
medium-sized quoted companies and companies in the early stage of development and maturity and who are not required to apply the UK Corporate Governance Code under the Listing Rules.
- Deloitte, May 2018

The new UK Code and further information from the FRC can be found using the links below:

Further information about the QCA Corporate Governance Code can be found here: