As part of our research on which corporate governance codes are followed by AIM companies, we also reviewed some aspects of the level of application of the 800+ companies on AIM that have adopted the QCA Corporate Governance Code.

Below is a summary of what proportion of companies fully apply the QCA Code and three areas where they are diverging.

The extent to which the remainder (3%) apply is unclear due to vagueness and ambiguity in their statements. 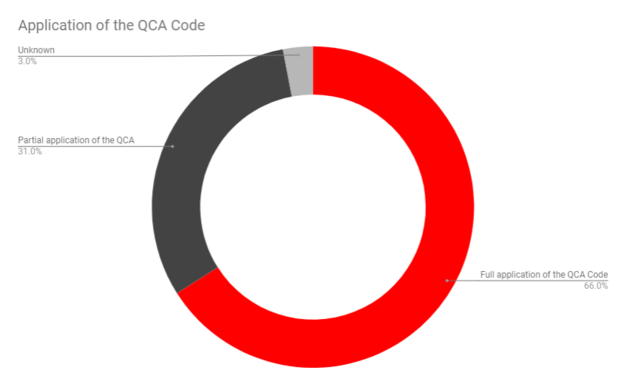 2. The Chair’s Corporate Governance Statement
The four aspects of the Chair’s statement in the QCA Code are to:

In our assessment, over half of the companies adopting the QCA Code (52%) do not fully meet these four aspects in the Chair's statement.

Often companies’ statements would mention how the QCA Code has been applied but not set out the Chair’s role, highlight where practice differs from the Code, or identify key governance matters during the year.

Principle 5 (“Maintain the board as a well-functioning, balanced team led by the Chair”) is the least fully adhered to Principle of the QCA Code, with 27% companies not meeting this. Most commonly, this is because they do not have the minimum recommendation of two independent NEDs.

When there are reasons cited for this, it is typically due to the early stage of development or small-sized nature of the company. Another common explanation is that there have been recent resignations.

Many companies express a desire to hire an additional independent NED, either to apply the code’s minimum recommendation of two independent NEDs, or to go beyond that in an attempt to further strengthen their corporate governance. However, it is worth noting that there is a spectrum of some companies ‘actively recruiting’, and others merely ‘considering’ hiring an (additional) independent NED.

Another frequent departure from Principle 5 is that of a separation between the roles of CEO and Chair. There is typically an acceptable justification for this given, often to do with (again) the early stage of development and/or small-size of a company, as well as resignations. Occasionally, a blending of the roles of CEO and Chair has occurred because of Board members being on maternity leave or the death of a Board member.

A few companies did not apply the section of the Principle stating that: ‘the board should be supported by committees (e.g. audit, remuneration and nomination) that have the necessary skills and knowledge to discharge their duties and responsibilities effectively.’ Most significantly, 27 companies did not have a nominations committee.

Principle 7 (“Evaluate board performance based on clear and relevant objectives, seeking continuous improvement”) created some confusion, especially with regards to board evaluations.

Whilst the QCA Code does differentiate between internal and external evaluations, many companies began discussing the formality of their evaluation process(es) and believe themselves to be transgressing because of their informal, ‘ad hoc’ approach. However, this does not necessarily go against the principle and, accordingly, the percentage of companies who have not adhered to the QCA Code would actually be less than the previously mentioned figure.

Nonetheless, a significant number of companies have stated that they will begin to improve their evaluations for the future. Some are planning annual, externally-facilitated board evaluations. Nearly all companies who have declared their intentions to have board evaluations in the future have cited their desire to apply (or in some cases, go beyond) the QCA Code as the primary reason for this.

In addition, a few companies have no succession plans in place, often because the board is not of an appropriate ‘size and maturity’.

Methodology
The list of all companies on AIM at the end of October 2018 was downloaded from London Stock Exchange’s website. The websites of the 927 companies on AIM were then manually reviewed in November 2018 to record which code they had applied.

Our thanks to Max Simmonds for conducting this research.

What Governance Committees do Small & Mid-Caps have? (Survey Findings)