The world is changing for mid and small-caps, whatever happens with Brexit

The QCA recently conducted a survey in partnership with Peel Hunt LLP examining the impact that the MiFID II European financial regulation regime is having on smaller companies in the UK.

What we found was that it is quite clear that there are some serious concerns about the impact that MiFID II is having on the market. Both the broking community and investment houses are going through a period of substantial change and we are seeing a decline in the availability of research on smaller companies, with a consequent perceived impact on liquidity.

But, potentially, there may be some good news. Our survey found that the negative impact on the broking and investment community may be causing companies to take the initiative to work with their advisors and to be more active in their engagement with investors, both current and potential.

This may, counterintuitively, lead to a better understanding between companies and investors, leading to more information in the marketplace and better liquidity in the medium-term (and a stronger fee-base for enlightened brokers and other advisors). The world is changing fast and companies should be testing their investors and advisors to ensure that they remain a relevant investment now and in the future. Maintaining a strong connection, directly and through advisors, is more important for quoted companies than ever. 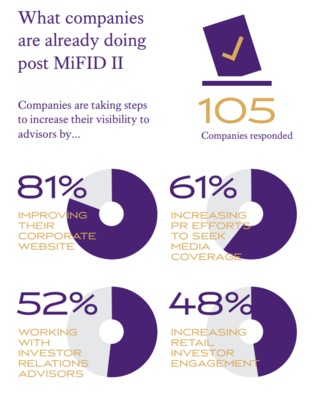 Of course, given we are approaching March 2019, we need to touch on the “B-word”. When we released this survey one of the headlines written up about it in the press was “City warns of worse to come as EU rules squeeze UK brokers”.

However, it is misleading to dress this up as EU rules that have been put on the UK against its will. In fact, the UK was heavily involved in the creation of the MiFID II framework and there is little indication that the UK is going to move towards lower regulation in comparison to Europe.

Historically, as part of the EU, the UK has been one of the main drivers towards stronger regulation and has had a tendency to “gold-plate” rules agreed at EU level. That is to go above and beyond the EU minimum and enforce higher regulation in the UK. Politicians (in the UK and elsewhere) tend to look for more things to regulate, rather than less, and there is little evidence of this changing in the UK after Brexit.

We hope that for the sake of business and the economy, a close relationship will be retained with our European neighbours after Brexit. However, the QCA have been looking to persuade the UK Government to give themselves room to tweak the EU financial rules they will absorb in a ‘no-deal’ scenario. The European rules have been written collectively between 28 countries and there are ways that there can be some recalibration to better reflect the nature of the UK market and of its growth company markets, which are much larger than in other European countries.

Like everyone else, we look to the coming weeks in the hope that some certainty will emerge but it’s hard to envisage any scenario that doesn’t extend the current political turmoil and its drag on the economy.

Please take our survey on ESG & board evaluations