The impact on society of small big businesses

Politicians and business leaders often refer to small and mid-size companies as being pivotal to the future of the British economy.

But the definition of “small and mid-size” can cover a huge range, and the difference between the UK’s largest companies and the rest is stark.

A new report written by the QCA and Hardman & Co examines this size differential and outlines the valuable contribution that growing companies on the stock market make to the UK.

This makes small and mid-caps much more valuable to the UK than many “strategic” sectors that are prioritised by government policy. For example, the automotive industry employs 856,000 people in the UK (according to SMMT). It would make sense then for policymakers to look to encourage an environment for these quoted companies to flourish, and to encourage more companies to think about raising permanent equity through an IPO.

The report also highlights the gulf in size between the biggest companies on the UK’s stock markets and the rest. At the end of February 2019, London Stock Exchange had over 2,000 companies listed on its markets (the Main Market and AIM). However, this includes investment companies and international companies (whose London quote is a secondary one). Filtering these out leaves 1,349 companies. 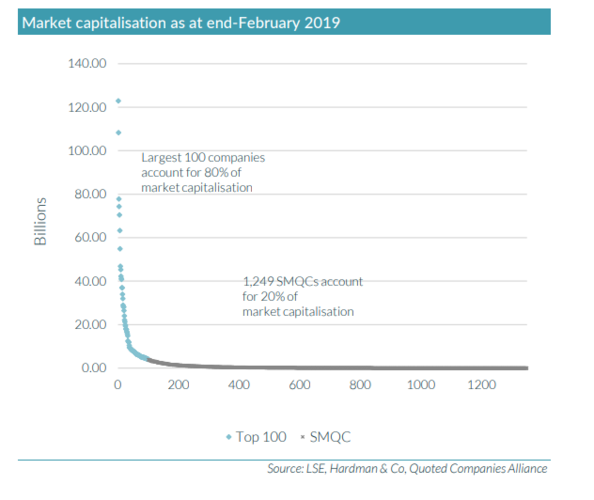 Yet we find that these small and mid-size quoted companies that make up the majority of the UK's public equity markets are disproportionately impacted by regulatory change. In comparison to FTSE 100 companies they inevitably lack the resources to respond and react to regulatory change and take onboard new requirements.

This is why at the QCA we emphasise proportionality in policy making and thinking “small first” when creating new rules and regulations for business. What we find often happens is a corporate scandal or failure makes headlines and the politicians (understandably) want to react to it. The problem is that the largest companies that they are targeting are the most capable of absorbing the time or cost of new requirements through their in-house legal and regulatory affairs teams.

It then becomes this next bracket down - the growth companies looking to be the future giants - that are the most hit by new rules as they don’t have the corresponding resources to manage the next wave of regulations.

We hope that policymakers can learn to better consider who they are impacting when devising policy and think about the potential of our small and mid-size company segment for the UK in the future. 3 million jobs and £26bn of tax should be enough to persuade most people, even politicians!