Survey: Brexit has a negative impact on turnover growth for small & mid-caps
26 July 2019

A new QCA survey of UK small and mid-cap companies reveals that the majority believe that preparing for Brexit in the past three years since the referendum vote has taken time away from other business priorities.

Read all the survey results in relation to Brexit here

The UK has over 1,200 small and mid-sized quoted companies, and a survey conducted by YouGov found that:

1. The last three years of the country preparing for Brexit since the 2016 referendum has negatively impacted their businesses 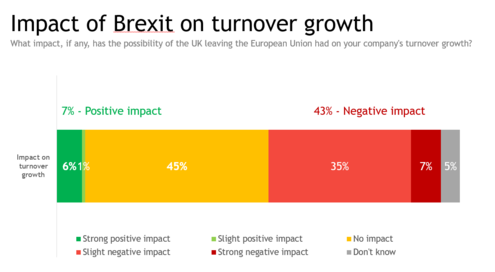 2. The information that the UK Government has provided to help prepare for Brexit has been inadequate

3. The majority of small and mid-caps are taking action to prepare for no deal:

4. Small & mid-caps are most likely to favour remaining in the EU

Read all the survey results in relation to Brexit here

Further results from the QCA/YouGov Small & Mid-Cap Sentiment Index for June 2019 can be found here.

Views on regulation from the survey can be found here.