Report: Are the public markets closing to smaller companies? 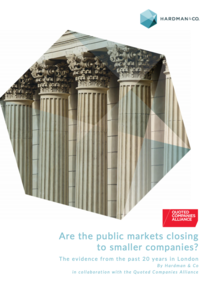 Hardman & Co and the QCA have published a new report examining data on the past 20 years of the UK public equity markets.

QCA surveys cited in the report indicate that these trends are driven by the level of regulatory burden, low interest rates making debt attractive, and increased competition from private equity, amongst other reasons.

The paper also outlines a number of recommendations on how to improve the attractiveness for companies to use the public equity markets, including examining certain regulations to reduce the burden on companies and taking steps to increase liquidity to encourage investment further down the market. There are also actions that companies can take to improve interest in their shares.

Previously, Hardman & Co and the QCA worked together to examine the contribution of small and mid-sized quoted companies and found that they:

Participate in the QCA/YouGov Small and Mid-Cap Sentiment Survey

How to manage your company's online image