Over 300 members of the small and mid-cap community came together on Thursday 20 September for our 30th Anniversary Dinner at the Savoy Hotel, London.

In attendance were representatives from quoted companies, investment funds, public markets and the media who were themselves a representation of the UK growth economy. With small and mid-sized quoted companies representing over 90% of all quoted companies, the evening enabled the community to come together to strengthen important and valued relationships in support of prosperous and diverse financial markets in the UK.

The dinner began with a one-minute silence in remembrance of the passing of Her Majesty Queen Elizabeth II. This was followed by speeches from Adam McConkey, QCA Chair and Marcus Stuttard, Head of AIM and UK Primary Markets, London Stock Exchange Group.

We were also happy to host a raffle which raised significant funds for the Mayor's Fund for London and also welcomed the Baroness Manningham-Buller, former Head of Britain’s Security Service (MI5) for an after-dinner speech.

Thank you to our sponsors who made the evening possible: London Stock Exchange as 30th Anniversary Dinner sponsor, Link Group as Champagne Reception sponsor and Winterflood Securities as After-Dinner Drinks sponsor. 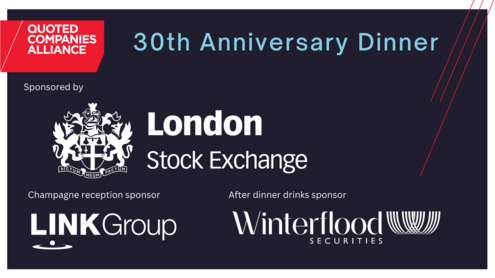 View the full press release for the 30th Anniversary Dinner.